What is the Apple Keyboard? 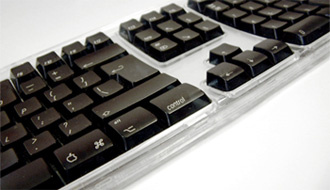 This article seeks to explain what an Apple Keyboard is and what the differences between that and a normal PC keyboard are.

I really don’t think you can read articles on the computer keyboard and don’t actually mentioning the Mac keyboard. So…

This type of keyboard is very popular amongst Mac users and even some PC users prefer to use keyboard made by Apple. This article seeks to explain the Mac keyboard, the benefits and also the negatives and how it compares to a typical PC keyboard.

One of the main difference between the normal keyboard and the Mac keyboard is to do with the keys of the Apple keyboard. The keys that are different basically perform the same operations as the Windows keys but are called something different. Look at the following examples:

Another main difference between the PC keyboard and the Apple keyboard is the layout. The majority of the keys are placed in the same or similar places, but there are a few noticable differences. As you can see the Apple Keyboard is very similar to a normal keyboard, however there are a few differences.

I hope this article has proved to be helpful to you and your understanding of the computer.

This has been an interesting article on the Apple Keyboard vs the PC Keyboard. I guess there are quite a number of differences that you …

Leave Apple Keyboard and Return to the Homepage