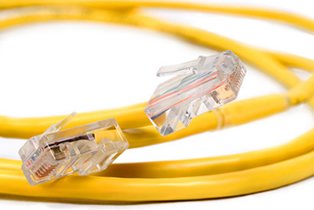 This page has been written to simply explain what the Cat 3 Network Cable is and the different ways you can use it.

There are a number of different categories of ethernet cables, one of which is the Cat 3 cable.

Category 3 cables, commonly known as Cat 3, are and out-dated form of network cable.

They are an unshielded twisted pair cable designed to carry data of up to 10 Mbit/s.

They were very popular in the early 1990s, but have long since fallen out of popular standing, once the faster and more modern CAT 5 cable came out.

Specifications of the Cat 3 Ethernet Cable

CAT3 cables were the popular standard with network administrators, in the early 1990s, but are now all but completely phased out. They may still be found in two-line telephone systems, and can still be easily adapted to be used to run VoIP.

For more specific information on the Cat3 Cable go to Wikipedia.

Cat-3 network cables can be used for 10Base-T networking and voice transmission.

There are two types of Cat3 cables. One of them is a cross-over cable that is used to connect two devices directly to eachother, eg. a PC directly to another PC or a Hub to another Hub.

However, the majority of Cat3 cables are straight through cables, and these are used to connect computers to hubs and switches. You can read more about this on the computer network cable page.

Well I hope that through this article you have managed to understand what the Cat 3 Network Cable is and learnt a little bit about the history of the Cat3 network cable.

If you have any questions about computer ethernet cables or Cat 3 network Cables, be sure to let me know or leave your opinion in the form below.